Grace20 is the code to use in order to get 20% off the purchase price of Through The Eyes Of Grace. I’m also hosting my first ever giveaway on my Facebook page, but I’m going to share the details with you here today. 🙂

A NEW CONTEST:
In an effort to promote my book sale this month, I’m hosting a contest. I’m giving away two (2) signed copies of Through The Eyes Of Grace, one for you and one to give as a gift. To enter all you have to do is like the offer below and click the “share” button. If you also have a Twitter and Pinterest account, I’ll give you two extra entries for sharing it there. I’ll draw one winner on August 1st and announce it here. Thanks so much–and good luck! —

So, won’t you take a minute to click over to my page and “like” it and the offer. If you’d also share the offer with your friends that will get you an extra entry into the contest. Look for our winner to be announced on Facebook (and here) Friday.

Thanks for helping me spread the word about my grandmother’s story. Blessings to you all!

…because today starts my first ever book sale!

I’m very excited to tell you that if you order my book through my publisher: CertaPublishing.com or through Amazon.com you will receive a 20% discount starting today through the end of July! All you have to do is use the coupon code – Grace20 – when checking out. It’s that simple! If you’ve already purchased a copy, now is a great time to purchase copies for Christmas presents. It’s closer than you think, and wouldn’t it be nice to have a few gifts already checked off your list–in July?

Also, you may not know that I have a Facebook page and would love it if you clicked over and “liked” it. I’m hosting a birthday giveaway for all those who follow me–but you’ll have to go there to find out how to enter.  🙂

Thank you for helping to make my birthday special.

Once again I was rummaging through some of my Mom’s papers and came upon a real treasure. I want to share it with you in an effort to inspire you to dig for your own undiscovered stories, as well as to encourage you to continue writing hand-written letters to your extended family. It is an art I’m afraid we’re losing.

It all began when I found a letter to my Mom and Dad from his cousin. It’s dated December 13, 1987. She was talking about an enclosed picture of her mom and my dad’s parents.

I have always felt “guilty” about grabbing that picture of Aunt Amy and my mother that day Jewett offered it to us when he was visiting several years ago, so now I’m trying to “make-up” for it!! This is not a copy of that picture, which wasn’t in very good condition anyway, but is one of a picture I thought you’d rather have since it shows both your mother and father. My mother is in it too.

As young people in their early 20’s – they used to help entertain at the hospital since they were all pretty talented. Aunt Amy (my Dad’s mom) always played the piano, Uncle Andy (my Dad’s dad) and my mother sang…Anyway, this is a copy of a group which put on “The Man From Brandon,” on December 7, 1912 – 75 years ago. Uncle Andy, as you can see, is in the front row. You’ll notice everyone is so serious–a characteristic when pictures were taken back in those days, for picture taking was serious business!!

Aunt Amy is to the left in the second row, and my mother is to the right in the top row. It would be interesting to know what the play was about since it appears to include a poodle, but I haven’t been able to locate it!

We know you’ll have a happy, busy Christmas, and we hope 1988 will be a healthy and prosperous one for you both and all your family.

In 1987 the internet wasn’t around, so it was impossible to locate the play mentioned. But imagine my delight when I did a quick Google search and found it! I downloaded a PDF of it and can’t wait to read it. And yes, it does include a poodle! (Click on the picture below to access the script). 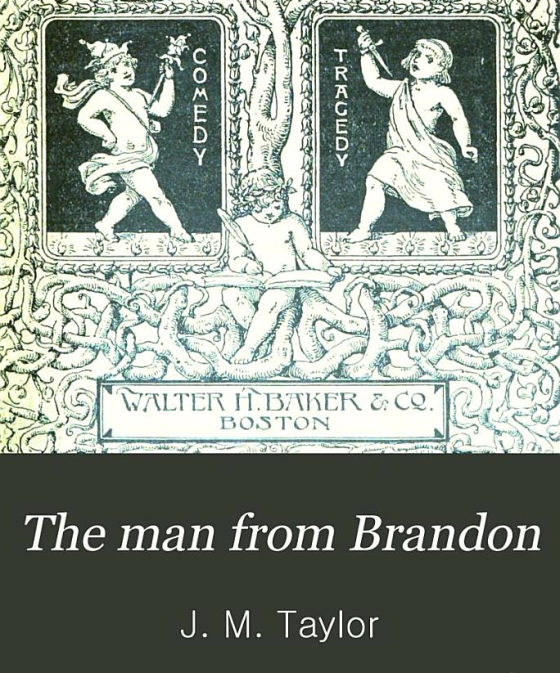 Over a hundred years ago, and I’m uncovering a snippet of my paternal grandparents’ lives about which I knew nothing. It is priceless! And I’ve discovered one reason why I love plays and musicals; It’s in my genes! What’s even more amazing is that I only met my paternal grandparents twice before they died because we lived in Florida, and they lived in Rhode Island. I’ve always regretted missing this part of my family’s story, but this letter is proof that there is much more to be discovered.

You never know where or when another story will surface. But you might miss it if you’re not looking. I’m so glad I didn’t throw this old letter away thinking it was meaningless. I plan to treasure it forever!

What interesting facts have you discovered lately about your family? I’d love to hear!

A yearly journey through God's Word

A Simpler Way to Finance

It's the doing that makes the difference!

Homeschooling with Boys... “AND ALL THY CHILDREN SHALL BE TAUGHT OF THE LORD, and GREAT shall be the peace of thy children.” Isaiah 54:13

thoughts from the forest

Hannes van Eeden
Rhythm In Life
The Essence of you

Sean of the South
The Romantic Vineyard

A Rich Harvest of Ideas to Help Your Marriage Grow

The Power of Story

Man Is Not An Island

"Life past, present, thoughts about the future, and ever changing world."

What You Blog About